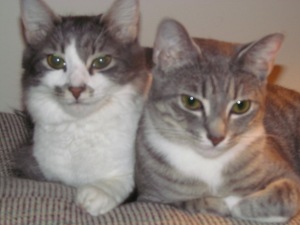 Lovey and Lily Together Again

Feline leukemia is a misnomer. It really isn’t leukemia as we think of the cancer that afflicts humans. Feline leukemia or FeLV_+ is really a retro-virus that has become the number one most highly infectious disease agent that produces a fatal illness in cats in the world.

There is no known cure……yet.

Feline leukemia cannot be transferred from cat to human. There are no known cases that have come forth to prove the disease is transferrable despite extensive years of research. FeLV+ is also not transferrable to dogs.

The term leukemia is used because of the way it behaves within infected cells. All retroviruses, including feline immunodeficiency virus (FeLV+) and human immunodeficiency virus (HIV), produce an enzyme, reverse transcriptase, which permits them to insert copies of their own genetic material into that of the cells they have infected. Although related, FeLV+ and feline immunodeficiency virus (FIV) differ in many ways, including their shape: FeLV+ is more circular while FIV is elongated. The two viruses are also quite different genetically, and their protein constituents are dissimilar in size and composition. Although many of the diseases caused by FeLV+ and FIV are similar, the specific ways in which they are caused differs.

A cat with FeLV+ disease may live for several weeks to several months, depending on how advanced the disease is at the time of diagnosis. However, it is impossible to tell how long any particular cat will survive.

A significant percentage of adult cats that are exposed to the virus develop immunity and do not become persistently viremic (i.e., will not carry the virus indefinitely in the blood and bone marrow). Usually those cats live out a normal life span. However, in some the virus may remain sequestered for a variable period of time somewhere in the body. It is thus conceivable that FeLV+ might break out and cause disease at a later date, after the cats have been stressed, or perhaps medicated with drugs that suppress the immune system.

There is a vaccine produced for this disease, but its use is debatable among many research veterinarians. Many cats harbor the virus for months after being infected before the disease develops.

Symptoms can include any of the following:

Fever, enlarged lymph nodes, diarrhea, inflammation of the lips and gums, upper-respiratory infections that persist for long periods and behavioral changes. Also, loss of appetite, slow but progressive weight loss, followed by a severe wasting late in the disease process, poor coat condition, paled gums and other mucous membranes, a variety of eye conditions, incontinence, and infections of the skin and urinary bladder.

Cats catch the disease by prolonged cat to cat contact through feces, urine, saliva, and other bodily secretions such as a mother’s milk.

A few experimental therapies are sometimes tried such as AZT and alpha-Interferon. Unfortunately, both drugs also suppress the immune system and have the potential to aggravate immune deficiency and susceptibility to infection.

Most notably T-Cyte Therapeutics, Inc. has come out with the newest and only treatment aid that is now starting to gain support in the veterinary community. This company was just recently approved a conditional license by the USDA to use its new treatment for both FeLV+ and FIV in the United States.

Because LTCI is very new to the market, it will take time for its scientific information to reach veterinarians and animal health organizations.

LTCI is a naturally-occurring, immune-modulating protein that helps restore a cat’s ability to fight infection. It eliminates impaired CD4 lymphocytes (infection-fighting, specialized white blood cells) and allows new, normal CD4s to produce the cytokines involved in increasing CD8 populations (the “killer” cells that go to infection sites, gobble up bacteria, find and destroy viruses in the body, and knock out cancer cells).

The result is normalization of blood parameters and resolution of opportunistic infections.

Until LTCI was granted the conditional license by the USDA, there was no effective treatment of the disease or its symptoms: Practitioners could only prescribe palliative care, isolation, and ultimately, euthanasia.

T-Cyte Therapeutics. Inc. have demonstrated that LTCI is able to enhance the immune status of FeLV+/FIV-infected cats with a corresponding, significant improvement in clinical symptoms. The therapeutic effects appear to be long-lasting, without any side effects.

LTCI may not be a cure for FeLV+ or FIV, but when effective, it aids in the treatment of these deadly diseases by restoring (modulating) your cat’s normal immune system.

LTCI is now available only to licensed veterinarians, who may order directly in the USA from T-Cyte Therapeutics, Inc. at 1-800-483-2104 or from outside the USA Masters Pharmaceuticals Ltd, Unit 380, Centennial Avenue, Centennial Park, Elstree Hertfordshire WD6 3TJ UK, (Tel: 0208 327 0900).

Hopefully, veterinarians and pet owners alike will soon have the news that both FeLV+ and FIV are no longer quick death sentences for their cats.