What made Carrie take that plunge to follow me into our house in late February 2012?

Carrie enjoying a nice comfortable spot on the kitten’s blanket

Of course she would have felt the warm air coming from inside, and she knew she wanted to find a place to nest. But something (or perhaps someone) gave her that push to come through the briefly open sliding glass door. Was it one of our deceased animals? True, it was cold outside; and life was hard out there, but all her training had been to avoid humans and stay well clear of them. Whatever the case, enter she did, only to find other cats about the place. That scared her, so she jumped and ran about the house, eventually settling in the guest bedroom. My husband opened a window, just in case she wanted to get out, but she remained in the room.

We didn’t know it then, but she had injured her right hind leg. Only much later were we able to see her sitting with it stuck out from her body. At any rate, she was not about to let us near her; however, she accepted the food and water and used the litter box we had placed in the room. Gradually she trusted us more and more, but only in small doses. Sometimes I would enter the room and see her lying on the bed, catching the sun light streaming in. Immediately she would leap to safety under the bed. But as time passed, she would come out and eat with either me or my husband present as long as we didn’t get too close. She did not want to be touched just yet. But as April 5th drew near, her demeanor was changing as her size was increasing. On the morning of April 5th, she came to the door of the room, and my husband stuck his hand in. She butted her head against it, and then her body, and kept it up. Was something momentous about to happen?

Unfortunately my husband had to work that day, and I had an evening class. Upon returning home first, I took her supper into her, and she didn’t rush out to eat as was her usual custom. Instead, I heard a high pitched mewing and looked under the bed to spy three kittens. Later on a fourth one showed up as well. Carrie was one proud mama, purring away and listening to all our comments about her wondrous accomplishment. What a change in her demeanor as well, as now she accepted our petting her with abandon. After a few days we started gingerly petting the kittens with one finger, and she was happy to let us touch her young charges. 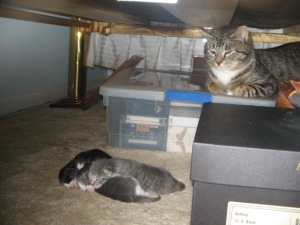 What a difference in her life! If she had remained outside, she would have had to forage or hunt for food, not receiving the nutrition we provided. The stress of going through childbirth outside where it was not climate controlled, plus having to worry about predators, would have most likely done her in quickly, and the kittens all would have died. Instead she got to care for them in a warm, safe room with meals readily available. She appreciated all this but was still confused by it. After all, she had been indoctrinated about the dangers of humans; why then were these being so nice to her? But the walls of resistance were slowly crumbling.

But only on her terms. The time came to take the kittens to the vet for their initial checkup; and she allowed that, wondering if her young ones would be returned to her. Of course they were, and things were back to normal. But then came the moment of taking them in for their first shots. Carrie was to go along for her own inoculations, but would have none of it. For my husband’s attempt at putting her into a carrier, she bit his hand and scratched his arm. Needless to say, she remained at home. He never yelled at her, and later in the evening talked softly to her, letting her know that we would never hurt her and asking her why she would do such a thing. She listened, and then got up, slowly came toward him and rubbed his hand with her head, telling him she was sorry she had done something to hurt him. 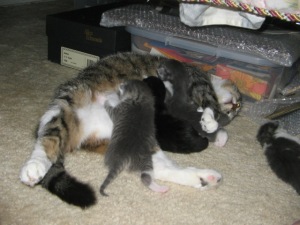 As the months passed, she and the kittens came out of the room and were given the full run of the house. But still she refused to have anything to do with the idea of a trip to the vet. I tried it and also was bitten for my trouble. Eventually our vet came to the house and treated her, and she was by that time quite docile. However, previous to that, one of the kittens had gotten sick one night; so my husband had taken her into the emergency clinic. They nursed her back to health but also tested her for feline leukemia; the result was positive. We subsequently had the other kittens tested, and they, too, got positive results. Of course it could have come from only one source; so we got our other adult cats inoculated. This is a horrible virus which no cat deserves.

Carrie Rests Her Weary Head on Lily. Here you can see her FeLV+ disease is in a more advanced stage. Her fur color is beginning to turn darker and thinner and she is more anemic and losing weight.

Carrie’s condition steadily deteriorated; but as it did, her resolve to enjoy her time with us increased. One thing the disease could not touch was that incredible amount of heart she had. She loved more and more; and she was much more demonstrative, wanting to be held, becoming a lap cat, and sniffing noses and bumping her head against ours. Eventually it was as though she could not get enough, wanting to make up for all the time she had not been able to give and receive love. This was her way of thanking us for everything we had done for her. But we told her that we were the ones to be giving thanks, as she had chosen us and given us the blessing of her kittens. The only question for us was how long she had on the earth; she was determined to make it last as long as she could. We didn’t think it would be anywhere near as long as it was.

On Wednesday, January 16, 2013 Carrie was very ill, hardly able to lift up her head. We thought her time had come, so I held her and comforted her; meanwhile my husband called our vet to please come. However, in the afternoon, my husband was giving some treats to her kittens, and guess who walked into the kitchen and meowed, telling him she wanted some as well! We called and asked our vet to hold off. That evening Carrie’s appetite was voracious. We knew this was only temporary, but it was good to see her fighting so hard to stay with us.

But Saturday, January 19th, was different. My husband saw her vomit on the floor and then fall over. We knew by the look in her eyes that she had no more fight left in her. We both decided that it was time, and our wonderful, compassionate vet came over that afternoon with a technician to perform the necessary task. This never gets any easier; my husband and I have experienced putting to sleep six animals between July, 1995, and August, 2012, and now our seventh, Carrie, in January, 2013. We both cried as though Carrie had been the first. Such is the price of loving these wonderful animals. But we wouldn’t trade any of them for all the love they have given.

Carrie truly chose us. No one pushed or coaxed her through that door in February 2012, at least no one we could see. She entered our home on that cold evening and never left. She saw her kittens grow and be loved, and that is all they have ever known. Viewing that, she came to love us as though she had been here for years. I told my husband that it is quality, not quantity; and he agrees with me about that. Carrie came here uncertain of anything but departed a loved and essential family member.

We had to end Carrie’s life that cold Saturday afternoon last January. Her disease had run its course; and although she gave a tremendous effort at staying alive, eventually the feline leukemia won out.

It had been getting progressively worse over the months. Having kittens produced the stress that triggered the full blown manifestation of the virus that had lain dormant in her body. But at least she got to see her kittens growing up happily and being loved in a friendly environment, things she never had experienced as a kitten herself. And while at first she had been a feral cat, not trusting anyone, she eventually let down all her guard and accepted the gift of all the love of our family. Certainly she gave as much as she received.

She was cremated, and her remains placed in our living room with our other animals urns. 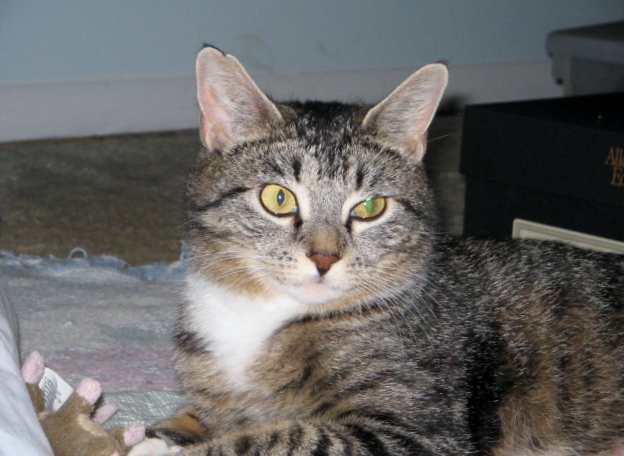 Although our time with Carrie was cut short, we felt we had known her for a lifetime. She opened up her cautious heart and allowed herself to experience human love before she left this world. What a glorious cat and terrific mother to her kittens.