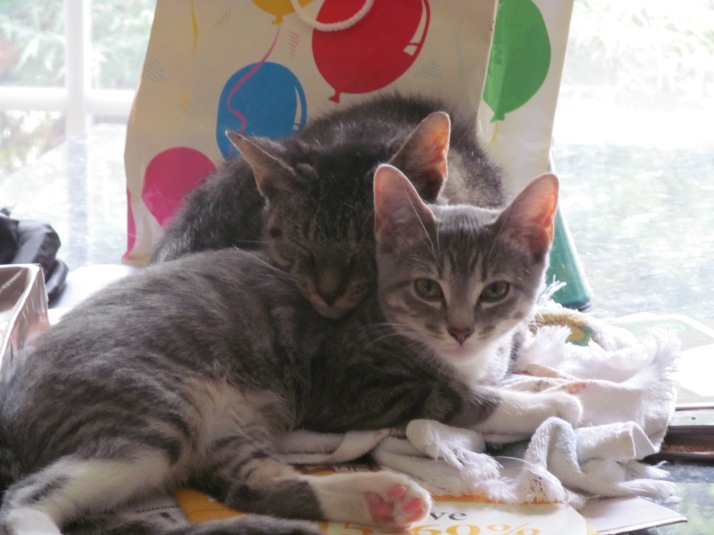 I created this site in the memory of one very special mother cat named Carrie.

Carrie was a feral cat when she came to me and my husband. I felt tremendous sympathy toward this beautiful short-haired tabby whose entire life up to that point had been spent living outside and suffering the elements. I began feeding her on my back patio in early December of 2011.

Our beginnings with Carrie were tentative and cautious. She was, after all, a wild animal. Yet I named her when she was still outside so I could feel I was developing a bond with her. Since she wouldn’t allow me to touch her (only to feed and water her), I made an assumption that she was a male cat. I named her Carrington (a good Southern name!) after a close friend of mine who had recently died of brain cancer in 2010.

One very cold evening in late February 2012, I did my usual routine and went to my back patio to bring her food. No sooner had I put the food down and turned to go back inside my warm home when Carrie darted between my legs and came inside! All was fine until she saw my three other cats and then she became very afraid. She did everything in her power to escape from them and me. She climbed my furniture in my dining room and living room running about wildly knocking knick-knacks and pictures onto the floor.

I tried to catch her, only to have her dart up my stairway and run into our guest room. My husband and I followed quickly and quarantined her there. He opened a window so Carrie would have the freedom to leave. However, she hid under the bed and stayed there. We left the room for about thirty minutes to let her decide what course of action she wanted to take.

We returned later to find her still hiding under the bed. She came to the conclusion that she wanted to stay. We then closed the window to keep the heat from escaping, and the rest is history. Carrie became cat number four.

Such was our introduction to Carrie.

It was after another remarkable event six weeks later that I realized that Carrington was a Carrie!

On April 5, 2012, she became a mother with four adorable darling kittens…all girls! We named them Missy, Daisy, Lily, and Lovey. She and the kittens were seemingly the picture of perfect health. She looked radiant and the kittens were getting fat and energetic as kittens are prone to do.

However, by June, 2012, and within two months after the birth of her kittens, we realized we had a very sick animal on our hands whose physical body was showing signs of slow deterioration. What had been a robust and healthy cat in late February (because of good nutrition with my twice daily feedings outside) was becoming an anemic cat who was losing a severe amount of weight. Her fur color had changed drastically from a grey striped with hints of tan and white to a dull dark brown. She developed severe skin problems with welts and open sores on her head and neck. She aggravated the problem by scratching constantly which then caused a tremendous amount of fur loss on the top of her head and behind her ears.

What we didn’t know before she came inside our house was that Carrie had contracted feline leukemia, commonly referred to as FeLV+ in the veterinarian world. I have no idea if she was born with the disease and had carried it in her bone marrow from birth or if she got the disease from other feral cats in the wild.

My husband and I cared for this sweet girl and grew to love her as though we had known her from birth. She was a loving animal and very appreciative of the nurturing we gave to her in addition to providing her safety and security in her decline.

I have created this website so that through reading about our relationship with this wonderful cat, I will draw public attention to this horrible and devastating disease. As you read more about her and her kittens’ brave lives, my hope is that you will come away inspired and motivated to become an advocate and help rid the world of FeLV+.

My wish is that concerned animal lovers will become highly educated to the symptoms of FeLV+ and how this disease ravages a cat’s body. This site will provide access to resources and links to donate to organizations that are striving to find a cure and end this number one killing disease of felines.